Westlake Lake History and Interesting Facts
D. K. Ludwig, an oil tanker and shipping magnate, also owned a development company called American- Hawaiian. He bought the area of Westlake Lake in the early sixties when it was known as the Russell Ranch for the then unheard of whopping price of $2,500 per acre. At that time Potrero Creek ran the length of the entire property and often flooded the valley whenever it rained hard. Half of the property was too rugged or too steep for real estate development and many of the locals were sure old Ludwig had gotten the short end of the deal. But Ludwig knew it was only a matter of time before a new freeway would run right past his property and, since it was only 35 miles from the largest population center in the state, he knew that “if he built it, they would come.”

In 1964, American-Hawaiian commissioned Bechtel Corporation to perform a comprehensive planning study for the entire 11,780 acres of the Albertson Ranch.

While the ultimate development varies somewhat from the final Bechtel report, the basic elements for what were to become the reality of the “City in the Country” were all established in that plan. 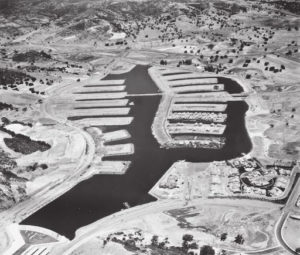 That study included not only the existing geology, hydrology, natural features, and land uses-the clear canvas of the open ranch upon which the long range concepts would be portrayed-but in two years of effort by literally hundreds of specialists, all elements of a successful community were studied. Housing types, circulation, land use standards, utilities, health care, churches, cemetery, recreational facilities, public safety, neighborhood identities, commercial and industrial developments, venture development costs, interim investments and schedules, construction costs, and sales projections were all evaluated in detail prior to breaking ground for this new, master-planned community. 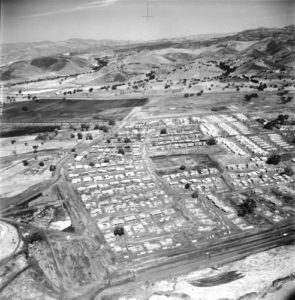 The original Bechtel study for the Albertson Ranch did not include a lake. Early considerations by Amercian-Hawaiian on handling Triunfo Creek included a concrete channel similar to that of some parts of the Los Angeles River, or a rock “rip-rap” channel with sloping sides. Neither of those options were found to adequately represent the “City in the Country” concept. Further studies showed that desirable and attractive waterfront properties could be generated by the construction of a lake.

After presenting a study on the lake proposal to D.K. Ludwig, he approved the plan. Accordingly, McIntire and Quiros, an engineering company, was retained to design the facility. Pascal and Ludwig Engineering Company started construction in 1966.

Actual construction of the dam and carving out of the lake started about 1965. There were many challenges in developing the project in such a remote and distant location, not the least of which was a tremendous challenge in getting two permits for everything as the land straddled two counties. Nevertheless, the L.A. papers started carrying advertisements about “Westlake Village, A New City In The Country.”

The first activity involved building the seven-hundred-foot-long, three-story-high concrete gravity dam to impound water from local springs and runoff from Lake Sherwood and Hidden Valley. The dam, with release gates to insure water flow to downstream facilities, used 22,500 cubic yards of concrete (enough for seventeen miles of four-lane highway). The unique shoreline, designed by Julian George, was composed of natural soil and concrete, sculpted with high-pressure water hoses. The entire lake project was completed in 1969 at a cost of $3.5 million. The name for the new community, Westlake Village, was selected after the decision was taken to build the dam and lake. 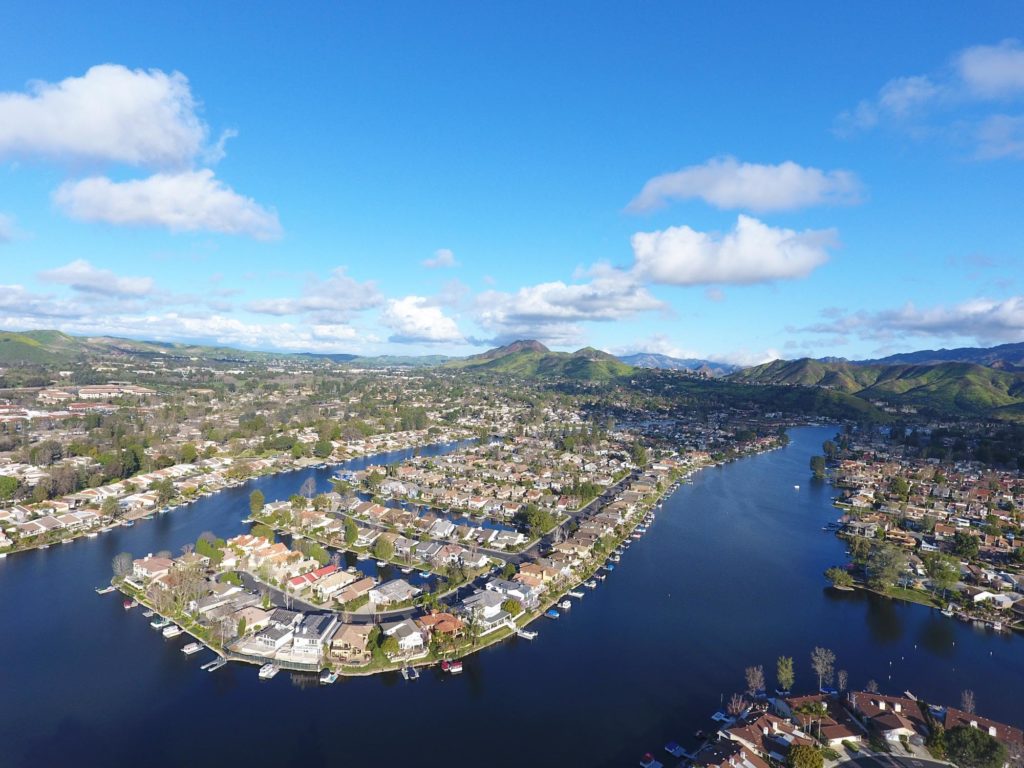 Upon its completion the 125 acre lake had an average depth of 10 feet and was stocked with 3,000 large mouth bass and 3,000 blue channel catfish. As a man made lake its ecology was a matter of major concern, and upon completion the University of California at Riverside, was retained to provide scientific advice. It was also noted the terrain is such that the area of runoff to the lake exceeds 29 square miles.

A highly unique feature was the construction of Westlake Island, partially built up from materials from the lake site. Because the island stretches across the county line, both Los Angeles and Ventura counties required a bridge access. After negotiations, American-Hawaiian received approval to build only one bridge – right on the county line – and designed to meet the differing standards of the two counties.

To commemorate that location, American-Hawaiian named the street that crosses the bridge “La Venta” after the two counties. As gated and guarded community, Westlake Island maintains its own streets and other amenities through its homeowner association.

In 1968, Ludwig formed and intially controlled Westlake Lake Management (WLMA), a nonprofit California corporation, to ultimately own and manage the lake. In 1974, Ludwig turned over all membership and control of WLMA to area homeowners and a commercial property owner adjacent the lake, and transferred ownership of Westlake Lake to WLMA. Ludwig had set up WLMA’s membersship structure to consist of over 1300 members when development was built out — compromised of the homeowners owning property in seven residential districts laid out around the lake inculding on the island, and one commercial district called the The Landing. Each of these eight districts is represented on the WLMA Board of Representatives which consists of 33 members. The Board also works with the leadership of the seven homeowners association governing the residential districts around the lake.

We contract with the Emmons Company for our accounting and executive management requirements and we retain the services of a Lake Manager and crew. The rest of the work is performed by the 33 members of the WLMA board who are all volunteers.

Over 1300 homes front on or have ready access to the lake within the seven districts; many of the residents own electric or sailboats for recreational use or fishing. Each WLMA member is assessed an annual fee for maintenance of the lake, dam, and other WLMA facilities.

A major recreational feature of the lake is the Westlake Yacht Club, a separate non-profit organization that was encouraged by the developer to establish its clubhouse and docking facilities near the dam. The club provides many social events, sponsors regattas– inviting other yacht clubs, conducts community boat parades and offers sailing lessons and classes which are also open to youth in the community.

Westlake dam is one of the largest privately owned dams in the U.S. It spans 635 feet, is 30 feet high on the back side (the down stream side), and is 12 feet thick at the base tapering to 2 feet at the top. Its base rests on bedrock. The top of the dam is 870 feet above sea level. The dam was originally built of earth but Ludwig changed his mind at the last minute when the insurance company reduced insurance rates if concrete were used. The dam has a sluice valve below the water line which is required by law. This is to reduce the water level in the event of an emergency such as a breach in the dam. This is comforting news to the folks in the trailer park just below the dam.

Other than rainfall runoff, our primary source of water is two underground wells which tap a large aquifer. During wet periods water runs from Lake Sherwood to Westlake Lake, to Malibu Lake, and on to the ocean.

Our lake is home to a large bird population as well as catfish, large mouth bass, bluegill and a substantial variety of turtles.

About 3,000 years ago, Chumash Indians moved into the region and lived by hunting rabbits and other game, and gathering grains and acorns. On-going excavations, archaeological sites, and polychrome rock paintings in the area provide a glimpse into the social and economic complexity of the ancient Chumash world.[8][9][10]

It is unknown when the first people settled in the area. A Chumash village was settled here in 500 BCE, known as Hipuc.[11] The Chumash Indians gathered and prepared acorns and other seeds. These were collected in the fall. The Chumash also hunted wild animals, fish and gathered plants. Their diet consisted of acorns, gophers, cottontail rabbits, skunks, jack rabbits, rats, mice, and seeds. They made their clothing from the skins of animals such as rabbits, deer, and sea otters. Women wore long skirts weaved from grass or soft bark, while men wore pieces of deerskin tied around their waists. Both men and women painted designs on their bodies and wore shell beads.[12]

On a return trip from Northern California in January 1770, a group of men led by Gaspar de Portola are believed to be the first Europeans to encounter the Chumash Indians in the Conejo Valley. Father Juan Crespi, chaplain and diarist of the expedition, wrote about El Triumfo, a Chumash village. He wrote that there was plenty of water and firewood in the village, and that the land was covered with pastures. He wrote: “We are on a plain of considerable extent and much beauty, forested on all parts by live oaks and oak trees, with much pasturage and water.” Crespi named the place El triunfo del Dulcísimo Nombre de Jesús (in English: The Triumph of the Sweetest Name of Jesus) to a camping place by a creek.

Other villages were found throughout the valley, including Satwiwa and two villages near Ventu Park Road in Newbury Park. These Chumash villages are believed by archeologists to have first been settled over 2,000 years ago. Another village was located by Lake Sherwood.[13]

In 1795, the area became part of one of the first Spanish land grants, Rancho Simi, given to the Pico family of California. When Mexico won independence from Spain in 1821, Alta California became Mexican territory, and the Rancho Simi grant was confirmed in 1842.

At the time California was admitted to the union in 1850, most of the land that later became Ventura County was divided among only 19 families. Rising knolls, arroyos, barrancas and ancient oaks were found on two Mexican land grants: Rancho El Conejo and Rancho Las Virgenes.[citation needed]

In 1881, the Russell brothers purchased a large portion of the land for cattle ranching. According to Patricia Allen, historian and family descendant, Andrew Russell beat the competition in buying the land by racing across 6,000 acres (24 km2) on a fifteen-minute trip in a buckboard and sealed the deal with a $20 gold piece. The price per acre was $2.50. The area continued to be known as the Russell Ranch although it was sold in 1925 to William Randolph Hearst and again in 1943 to Fred Albertson. The Russell family leased back part of the land to continue its successful cattle ranch operation while the Albertson Company used the vast area as a movie ranch. Many movies and television shows were filmed in the Conejo Valley, including Robin Hood, King Rat, Laredo, and various episodes of Tarzan, Buck Rogers, Gunsmoke and Bonanza. The 1940 film Danger Ahead was filmed on Westlake Boulevard.[14]

In 1963, Daniel K. Ludwig’s American-Hawaiian Steamship Company bought the 12,000 acre (49 km2) ranch for $32 million and, in partnership with Prudential Insurance Company, commissioned the preparation of a master plan by architectural and planning firm A. C. Martin and Associates.[7] This new “city in the country” planned to have a firm economic base including commercial areas, residential neighborhoods, and ample green space with the lake as a focal point. Prominent architects, engineers, and land planners participated in designing the new community, a prominent example of planned 1960s-style suburbanism.[15][16][17][18]

The original tract was divided by the Los Angeles/Ventura county line. In 1968 and 1972, two portions of the Westlake development consisting of 8,544 acres (35 km2) on the Ventura County side were annexed into the city of Thousand Oaks.[19] In 1981, the Los Angeles County portion (3,456 acres (13.99 km2) or roughly 1/3) of the Westlake master-planned community was incorporated as the City of Westlake Village. California state law prevents a city from existing in two separate counties.[20]

Will Smith, musician and actor[76]